This is a brief review of Matt Dinniman’s “The Hobgoblin Riot”. This is the second book in the “Dominion of Blades” series, and is categorized as a LitRPG fantasy novel. 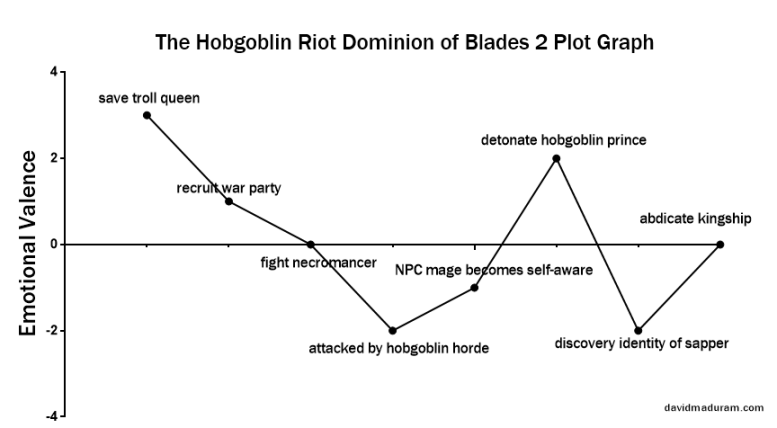 A simplified graph of the major plot points in this title can be seen above. The first book in this series — Dominion of Blades — was one of the best litRPG titles that I’ve read so far, so I was really quite looking forward to this title as well. However, the majority of title focused on a ‘tower defense’ game mechanic, which really limited the depth and breadth of what this title had to offer. In theory, a change in game mechanics from a standard LitRPG adventure novel to a ‘tower defense’ might have sounded like a breath of fresh air — after all, I’ve personally loved tower defense games such as Kingdom Rush, Jelly Defense, Orcs must Die, and Defense Grid 1&2. However, despite the intriguing enemies and conceptually inventive traps (liquid sand pit), it felt rather claustrophobic to be stuck in a besieged castle for such a long duration.

Although I wasn’t a fan of the main plot line, this book has several decent subplots. Within the many subplots, the most memorable I found were (1) searching for the identify of Isabella, (2) figuring how to defeat the hobgoblin prince, and (3) discovering how the NPCs are becoming more self-aware. Unfortunately, many of the subplots started out interesting, but eventually fizzled out under the weight of the main plot-line. As a case in point, the entire first book sets up the search for Sandra as an epic quest, but this turns out to be a middling afterthought that is wrapped up in a brief chapter. Similarly, the mage Keta — possibly the most powerful character in the game — turns traitor, but instead of building her up as a foil for the protagonist, she simply falls apart after a tepid confrontation. Both of these subplots could have been amazing if properly expanded, but simply fell prey to a bloated central plot.

Although much of this title is spent in the confines of the hobgoblin city, the world itself is quite nice — the introductory scenes in the Rafingo desert are beautifully depicted, and it is amazing to see the life that the author puts into the various races that populate the cities and dungeons. Although I still strongly feel that the ‘tower defense’ mechanic handicaps the storytelling, the environments for the boss battles were great — of note, I enjoyed seeing how the gashadokuro was defeated, and the use of the ‘Fish Fry’ spell on the last villain was hilarious. While these boss battles were great, it quickly grew old to see the more mundane villains get defeated (again) by ‘slam traps’ — I felt in these cases, the author did more ‘telling’ than ‘showing’.

One thing that I didn’t like about this title was just how frequently the point of view changed — there are at least six active engagements in the title, including (1) the tower defense situation in Castellane, (2) the primordial invasion situation in Harmony, (2) real-life coup on the Hibiscus. Each of these engagements have a different storyteller, and it is confusing to identify who exactly is the central protagonist. In addition, there are quite a lot of flashbacks in the story. Although I’m sure the intention of these flashbacks was to add emotional depth to the characters, it ended up adding more confusion than anything else.

Most of the title is written from the perspective of Popper, one of the colleagues of the main protagonist from the first ‘Dominion of Blades’ title. Although Popper does a great job at comic relief, I don’t believe that he was a particularly compelling protagonist — the backstory was rather tacky, and I can’t imagine that the future world could send starships to distant galaxies but not have solutions for reliable power and cerebral palsy.

I also thought that the book would do a better job at setting up a main villain — the first book did an excellent job of this in the form of Daniels, but it was just confusing who exactly the main villain was in this title was and what their role was (Keta? Isabella? Smallthunder? Genma?).

At the beginning of the title, the author specifies this title was actually supposed to be two books, one told from the perspective of Jonah and one told from the perspective of Popper. After reading this book, I wish that the author had kept to this plan, both in terms of reducing bloat and improving clarity. There are many LitRPG series that have an excellent book focusing on a character who is not the main protagonist — Awaken Online Retribution and The Artificer are the first two titles that come to mind. One wonders whether this book would be more memorable if a split was made.

From a more mundane perspective, grammar was a little hard to read, and there were a few spelling mistakes that were highly annoying.

Overall, this title was disappointing. Although the prior book in the series set up a compelling world, this title was ruined by its fixation on ‘tower defense’, fragmented point of view, and poor attention to detail.

2 thoughts on “The Hobgoblin Riot Dominion of Blades 2 Review”