This is a brief review of Will Wight’s “Ghostwater”. This is the fifth book in the “Cradle” series, and is categorized as a fantasy novel. 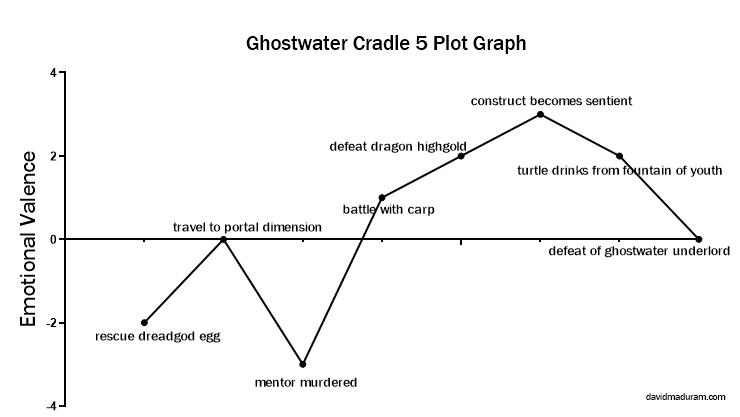 A simplified graph of the major plot points in this title can be seen above. I’ve been following this series for quite some time and was quite disappointed in the last book in the series (Skysworn). Thankfully, this book is much more engaging than its predecessor. One of my favorite things about this series is its laser-like focus on training — the first book in the series posits that a dreadbeast will destroy the protagonist’s home, so the protagonist relentlessly trains until he is able to contend against the upcoming threat. In the past, the protagonist has done all sorts of ridiculous trials to become stronger (i.e. get stung by sandvipers), and this title is no different, with him eating magic-infused fish and bonding with an artificial intelligence. Although there is some attention to the larger events going on in the Cradle universe, I thought that the narrow focus on the protagonist was a pleasant change and led to a more enjoyable book.

This title does have a few subplots going on, namely (1) Yerin’s struggle to master her symbiote, (2) Eithan’s attempt to save the kingdom from the minions of the Bleeding Phoenix dreadbeast, and (3) the conflict between the black and gold dragon bloodlines. All of these different subplots are quite engrossing in their own right and do a good job on adding variety to the main plotline. Although there was a fairly good sense of closure in this title, I am a little concerned about the ever-growing list of juggling balls in play in this series — we are still no closer to figuring out why Mercy was expelled, what happened to Jai Long’s sister, and what exactly is going on with the Ascended / Ozriel. Although I was quite captivated by the idea of exploring a research station of Northstrider, it’s important to note that Northstrider was barely a footnote in prior books, and the in-depth exploration into his life does little to tie up loose ends.

Although there is quite a lot of hate against underwater levels (as Seth Everman notes), this setting was absolutely fantastic — the ocean depths were perfect for action scenes, and some of the resident wildlife (Diamonscale Sea Drake, Silverfang Carp) were absolutely amazing. Much of the main plotline is set in research labs of a god-level character, and it is amazing to see the neat toys and tools in each facility.

One thing that I thought was handled nicely is point of view — unlike the prior book, this book really limits the number of simultaneous points of view and does a nice transition between each POV to minimize disruption. I think that this really helped readability, and also was used nicely to bring a sense of closure — as a case in point, Yerin is separated from Lindon, they both struggle in different environments (as shown by the author) and are finally reunited.

I’ve always loved reading about interactions between an artificial intelligence and a partnered central protagonist. This has been famously executed in titles like Halo and the Gam3, but I particularly like the author’s spin on the AI Dross. Unlike the typical cool / competent AI companions, Dross is annoying, hilarious, and intriguing — I absolutely loved seeing him mature during the novel. I also thought that some of his quotes were great:

“Some believe that hope is the strongest force in the universe,” Dross said. “Although that is objectively untrue.”

I also enjoyed seeing the protagonist transition into the HighGold rank — as noted previously, he is singularly focused on becoming physically stronger, to the point of stunting his emotional growth. I find it somewhat amusing that there’s always a long spiel by a mentor that warns the protagonist to slow down, but the protagonist continues on regardless. I also quite enjoyed his fight with Ekeri, especially when he uses his Empty Palm — this technique was his signature move in the first book in the series, so it’s nice to see the protagonist return to his roots after all this time.

This book was well-paced and the writing style was perfect. This author is one of the best in writing great action scenes, and I couldn’t stop reading the final battle to save Dross. My absolute favorite part of the book was actually the outtakes at the very end — this was completely unexpected and made me crack up more than once. I’m hoping we actually see DrossTheRobotGhost on Patreon or witness the story behind Bowey McBowFace, but perhaps that is for another time.

Overall, this title was excellent. Great fight scenes, a cohesive plotline, and compelling characters make this a title to recommend.