This is a brief review of Skyler Grant’s “Glitch Hunter“. This is categorized as a fantasy LitRPG novel.

A simplified graph of the major plot points in this title can be seen above. This title opens with the main character trapped and confused with two corpses, which is an apt description of how I felt while reading this book — while I felt compelled to finish the book based on a friend’s recommendation, the story was neither interesting, engaging, or entertaining. As one can see from the plot graph, this book has a more mature theme than its LitRPG peers. While darker themes works for many fantasy titles (i.e. Game of Thrones, Red Rising, etc.) the grittier theme appears quite forced in this title, and seems to be present purely for the point of shock value in lieu of an expanded storytelling palette.

The plot itself follows a relatively standard Hero’s Journey format, with the main character progressing from a novice trainee into a confident Glitch Hunter with his own code of morals. Although the main character predominantly followed a clearly defined plot, there were a number of subplots that appeared promising but simply failed to deliver. As a case in point, the protagonist encounters a legendary sword which is supposedly capable of tremendous destructive power, but the sword is teleported to a distant land and functionally vanishes. Similarly, the protagonist is accompanied by a djinn who can make wishes come true, but despite significant foreshadowing, this power is never used. This tendency of leaving us hanging is present for main story events as well — there’s a portion in the book where the protagonist meets his elder sister, who hints that she is adventuring in a futuristic world, but then disappears without a trace. At the end of the title, one wishes that the author spent less time in adding to the protagonists’ harem, and spent more time on rudimentary story mechanics.

As noted, this title is a fantasy-themed litRPG title. I personally find litRPG titles appealing because they suggest that there is some believable algorithm that defines how players advance and improve during the story narrative. However, the numerical statistics presented in the book were so carelessly picked that it really disrupted the credibility of the story — as a case in point, one of the final bosses in the book (the Glutton, formerly the father of the main story villain) yields 5 XP after a grueling fight, while the first minion in the game (Aryx) yields 6 XP (half-share of 3). Similarly, near the end of the book, the level 5 hero intimidates the level 27 Red Queen with his sword — however, just a few pages earlier, the hero is himself scared of confronting a level 4 bird-woman. In some sense, it was more frustrating to read a book with a half-baked progression system than one with no progression system at all.

While the fantasy setting of the game itself was serviceable enough, it was hard to conceptualize a bracer / advanced heads-up display in a fantasy world without an appropriate introduction. Additionally, even given the ‘game-world’ latitude of combat, it was unusual to see characters bounce back from a massive avalanche-based crush injury without much ado (rhabdomyolysis, rib fractures, trauma). Finally, and I know that this is more of a petty personal attack than anything else, but the whole concept of a harmonizing sword is cockamamie — in the latter parts of the book, the protagonist’s sword loses its harmonizing effect when coated with oil, but apparently it still keeps its tone when deformed by a metal hammer. I’m not sure if the author was initially trying to evoke the much more dangerous concept of resonant frequency, but I personally found idea of a warrier hitting a sword with a mallet to be more amusing than intimidating.

Although the protagonist was a pretty standard anti-hero, the supporting cast was quite good — I particularly liked the dialect used by Helen. The main villain in this story was excellent, and really caught me off-guard with the big reveal. I did think that the djinn in the story had a lot of unused potential — an immortal being is pretty amazing any way you look at it, but the character only seemed to be used as cannon fodder and bait for booby-traps.

One thing that I absolutely despise is bad grammar / poor spelling. I’ve included some of the examples that I found below, but there is no reason that a twenty-dollar print book has these many mistakes. I’m not sure that this is a function of careless dictation, but this simply reinforces the theme that this book went through a sloppy writing process. Not acceptable. 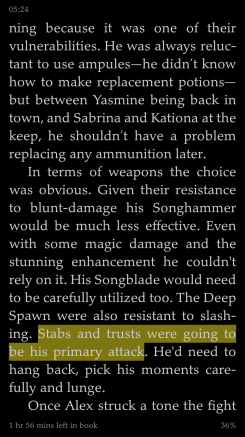 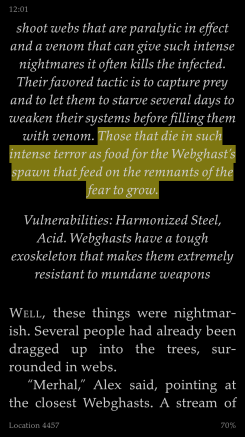 As a dedicated fan of litRPG, there are *very* few titles that I simply cannot recommend in any shape of form. Although I was able to finish this title, the careless writing, bloated subplots, and bad grammar make it an easy title to skip.