Last week, my wife and I had the pleasure of going to the Courtlough Shooting Grounds in Balbriggan Ireland. For our wedding anniversary, we wanted to do something fun and exciting — my wife had previously mentioned that she wanted try out either falconry or clay pigeon shooting when she was in Ireland, and and fortunately there was a great deal offered at Courtlough which was well-reviewed and reasonably priced.

It was pretty easy to get to the Courtlough grounds from Dublin. The first thing that we had to do was to go to Connolly Train Station was about 5 minutes from the city center. Once we got there we took the train to Balbriggan, and then hailed a taxi using the mytaxi phone app.

Once we got to the grounds, we were paired with an instructor and taken to the shooting rounds to get started. 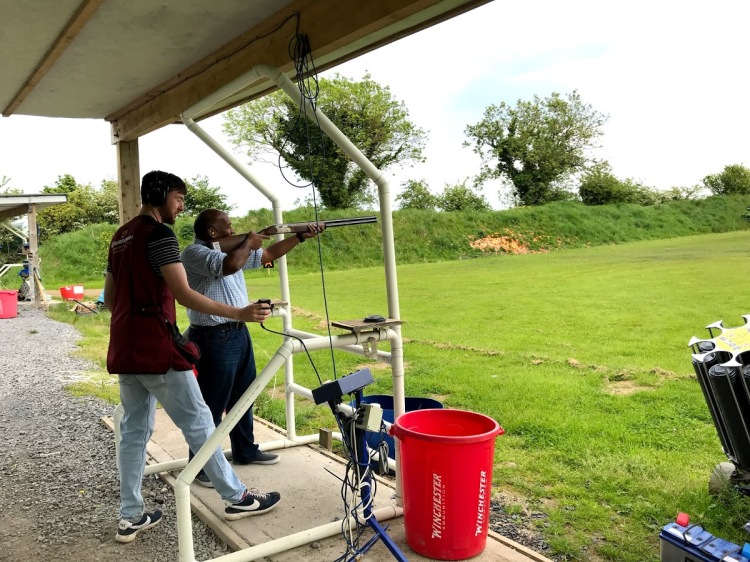 On the course, my wife and I decided to do the 25-shot sport shooting package (36 euros per person). This package was split into three independent rounds where my wife and I swapped places between rounds. The first round was composed of 7 shots, the second was 8 shots, then the third was 10 shots. The first seven session round was composed of trying to use a double barrelled shotgun to shoot clay disks thrown mechanically from a berm outside the shooting arena. For this round, the disc was thrown to us with a wide, easy to hit cross section. The next round we had to shoot at discs that were thrown with a narrow cross-section that was pretty difficult to hit. The last round was the most challenging of all and we had to use both of our shotgun barrels to hit one narrow section and one wide cross-section disc consecutively within a span of less than 10 seconds. During the match, both of us were aggressively keeping score, but we ended up with a tie so no hard feelings haha. At the end of the match, we took some photos, said goodbye to our instructor and then headed back to the city for the rest of a great day.

All in all I would highly recommend doing the shooting course at Courtlough. They were very professional and we enjoyed ourselves tremendously.